Terrace of 7 houses, originally including a coffee house; now including public house and cafe. 1838, incorporating early C18 house at each end (No.24 High Petergate and No.1 Precentor's Court); coffee house converted to public house c1855; other later alterations, and C20 shopfront to Nos 30 and 32. By J. P. Pritchett.

Houses, Nos. 24–36 (even), and No. 1 Precentor's Court, forming a group of seven on a fan-shaped plan, were designed by J. P. Pritchett in 1838 (plans in YML) and incorporated an early 18th-century house at each end; the design included a public house, now the York Arms, No. 26, and a shop. Pritchett's work involved the demolition of the old Peter Prison and the mediaeval Minster Gate. The houses are of three storeys and cellars; No. 24 is lower than the later houses. Nos. 26–36 and the side of No. 1 Precentor's Court facing the Minster are all faced in uniform 19th-century brickwork. The front to Precentor's Court retains the original thinner bricks of the 18th-century elevation and has flush-framed windows under gauged brick heads, and a moulded door surround, but a later modillioned eaves cornice. There are late 18th-century staircases in the two earlier houses and also, reused, in part of No. 26 and in No. 32 High Petergate. 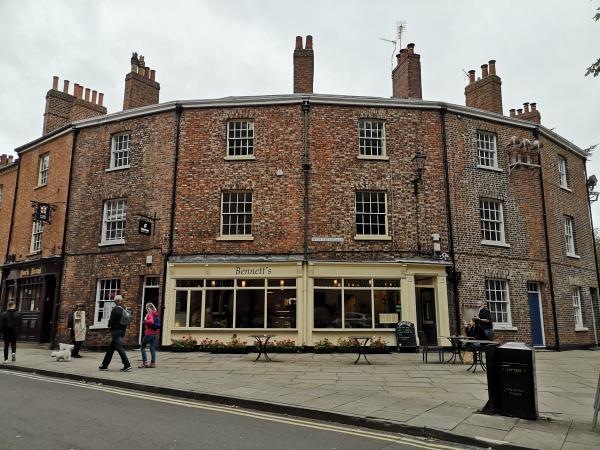 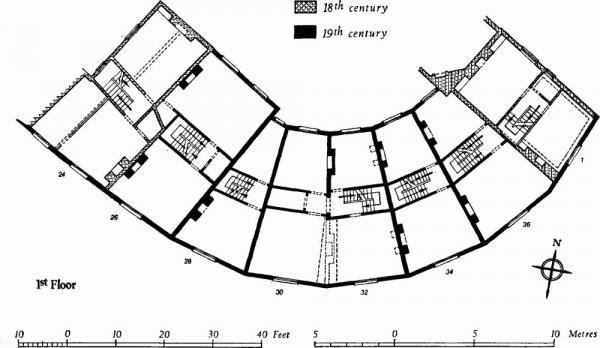 An Inventory of the Historical Monuments in City of York, Volume 5, Central
Historic England