This record is not yet complete. We plan to visit this site in the near future and will update this record once our research is complete.

The almshouses were built to replace former buildings belonging to the same charity in Tanner Row in York, when the land was cleared for the new railway. Interesting as a tablet on the building itself records the architects as Pritchett & Sons, but academic references (sourced below) refer simply to Pritchett acting alone. Indicative of poor referencing/unclear research.

There is a wardens house, into which the St Saviourgate, street facing facade has a tablet inset reading: “This hospital (removed from Tanner Row) was erected in 1840 under the order of the Court of Chancery, in the cause Attorney General Shore & others. Pritchett & Son Architects”

"Lady Hewley's Hospital was originally founded in Tanner Row in 1700. Sir John Hewley was MP for York in the late 17th century, and a parliamentary colleague of Sir Henry Thompson. He and his wife Sarah, Lady Hewley (with whom he had eloped), were non-conformists and frequently sheltered George Fox, founder of the Quaker movement, at their house, Bell Hall, in Naburn. They also had a house in St Saviourgate where Lady Hewley preferred to live after the death of her husband in 1697. She was a wealthy woman with no living children; her charitable endowments were and remain very valuable. She contributed to the cost of construction of the chapel nearby - though after hre death in 1710 she was buried in St Saviour's church. She set up two charities, one to offer financial support to preachers or their widows, and the education of young men for the ministry; the other to support her almshouse in York and the people living in it.

The original almshouse, or hospital, was built at the Black Fryars, the site of the Dominican Friary in Tanner Row, opposite the end of Barker Lane. Thomas Jeffrey's 1772 plan of York shows its layout (RCHM v. 3. p.xxxv). [...]

In the 1830's George Hudson and several York councillors were involved in bringing the railway to York. George Hudson in particular wished to build a station inside the city walls. The required area, including Lady Hewley's hospital, was compulsorily purchased by the railway company, the sum paid for the hospital being £5,105. Though this sounds draconian, it seems that the new almshouses in St Saviourgate were ready for the residents to move into before the old almshouses was demolished and the railway used a temporary station outside the walls until the new station could be built in Tanner Row. [...]

St Saviourgate. The cottages, designed by J. P. Pritchett, were built on or near the site of Lady Hewley's townhouse, near to St Saviour's church. They are built of red brick with sandstone facades, and slate roofs. The supervisors/caretaker's house stands at the entrance, it has two bedrooms, living room, entrance hall and kitchen. Set into the end wall overlooking the street is a tablet recording the original foundation, with Lady Hewley's arms, brought from the old hospital. [...]

There were originally 7 cottages and a chapel, but the chapel was converted into another dwelling in 1975 and there are now 8 one bedroom cottages, with two-bedroom cottages for protestant men and women over 60. The 8 women living there in 1909 received £2 a month each; the lone man received £2. 16s 8d. "

There is further description in S. Carole regarding access changes to the site c.1946. 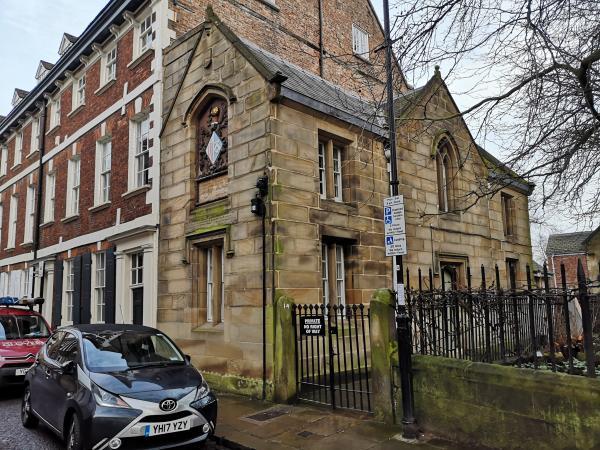 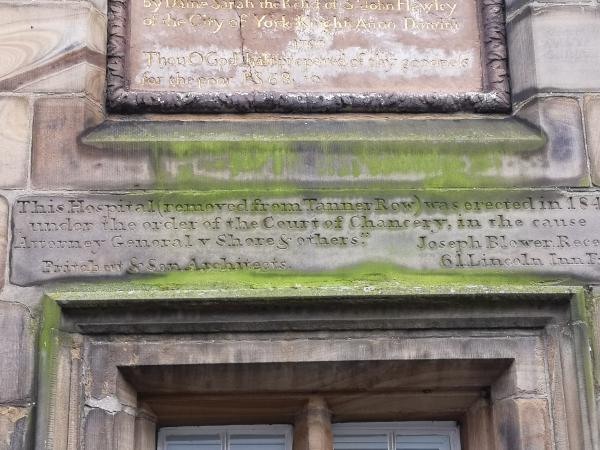 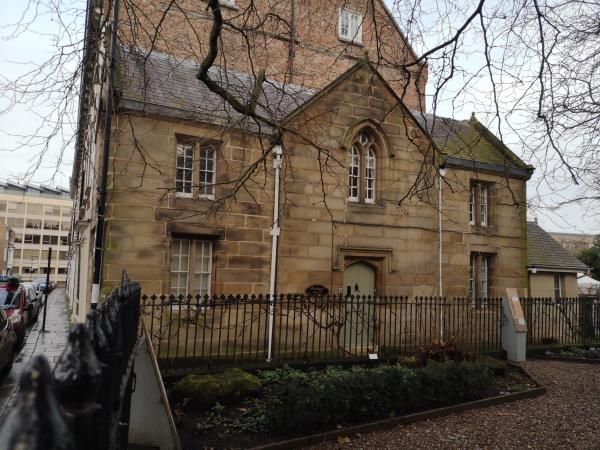 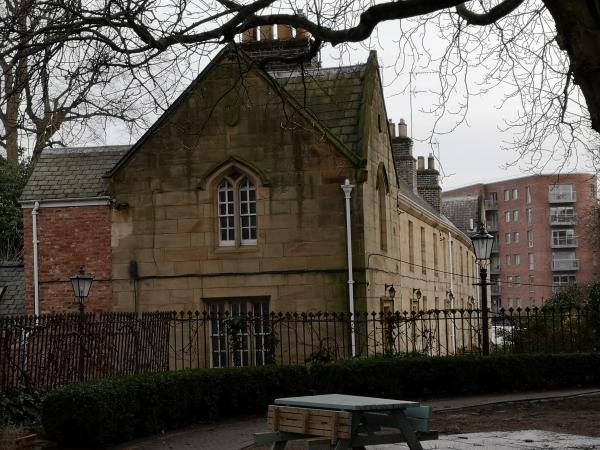